Kuopio Goes Slush side event – “It couldn’t be any better”

“It felt so comfortable sitting relaxed on the couch while enjoying my vegan salad, premium beer and grain-free bite-size snacks, having no shoes on and discussing with CEOs, experts and investors about the future of food industry in peace… it couldn’t be any better!” These were the words that Ardita Hoxha-Jahja, the agri-food cluster manager, said about her experience at the Kuopio Goes Slush side event.

Kuopio Goes Slush in a nutshell 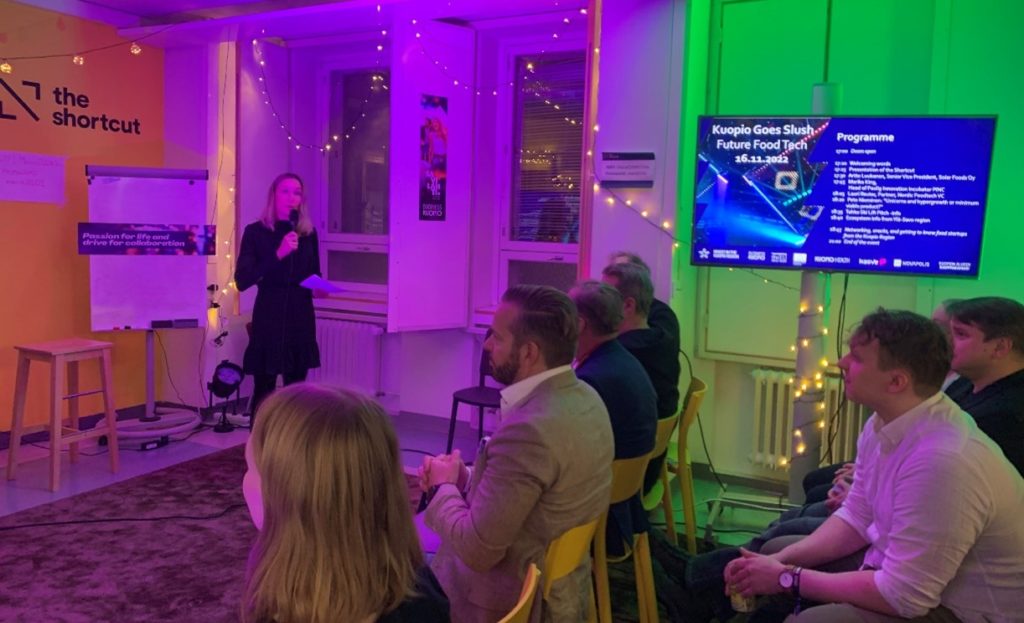 In 2018, the idea of organizing a side event before the Slush was initiated. Later on, the Kuopio Goes Slush side event gained recognition after three years of successful organizing. This year the side event was organized by Business Kuopio invest and expand in Pojois-Savo project for the fourth time and took place a day before the great Slush event at Maria 01, The Nordic’s Leading Start-up Campus in Helsinki with the theme “Future Food Tech”. As some of the attendees commented, the side event was quite successful in terms of bringing together local businesses, experts, investors, even students, as well as people from abroad and providing them with the opportunity to network.

Keynote speakers from the food industry, such as Solar Foods Oy, Paulig Innovation Incubator PINC, and Nordic Food-Tech Venture Capital, spoke on a variety of subjects, including top-notch technologies applied in the food sector, investment opportunities and their focus, and the transition to a post-agricultural society where sustainability, the circular economy, and new technologies are essential components. In addition to the key speakers, Pete Nieminen, a well-known name in ICT and digital business development, Marginum Oy, the winner of Tahko SLP 2022, and representatives of Tahko Ski Lift Pitch event, Savon Voima Oy, and Ylä-Savo region gave the participants even more information in addition to the keynote speakers.

Additionally, three Kuopio-based food companies catered the event by bringing their delicious products, merely to give a more calming and delightful vibe. There were salads provided by KomeroFood Oy, grain-free buns by Ketoinen Oy, and drinks by RPS Brewing Oy.

Out of 91 participants that registered for the event, 72 attendees from 46 different industries/companies attended the side event. The participants range from investors, Venture Capitals, tech-companies/ start-ups, experts, university and university of applied science, entrepreneurs, and innovation cluster, from all around Finland and even other countries (e.g. Hong Kong, Thailand, Latvia, Germany, Singapore, and Japan). 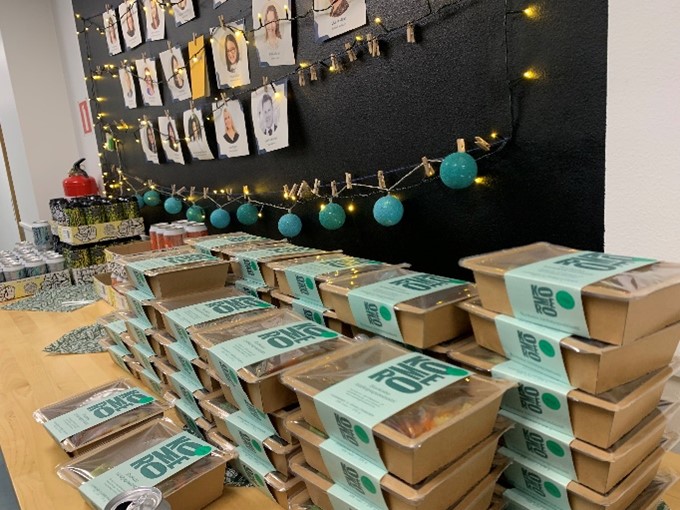 This year, the invest and expand in Pohjois-Savo region project decided to have the Kuopio Goes Slush side event more focused. Rather than having an open theme where all the companies from different sectors could participate, it was decided to choose a theme for the event and try to gather companies, research institutions, investors, and industry experts together to share ideas and network.

But why Food Tech?

Food production is EU’s largest production branch. In Finland, food industry is the biggest manufacturer of consumer products, and 1 in 10 work in the agri-food business. The food branch is globally in the midst of rapid change. The growth of the industry is not about to stop, as it is estimated that by 2050, we need 60% more food to feed growing populations.[1] The creation of a favorable food environment that makes it easier to choose healthy and sustainable diets will benefit consumers’ health and quality of life and reduce health-related costs for society.

People pay increasing attention to environmental, health, social and ethical issues[2] and they seek value in food more than ever before. The societies want food that is fresh, less processed, and sustainably sourced. And the calls for shorter supply chains have intensified during the current outbreak (European Commission, 2020).

On the other hand, Finland (more specifically in the Kuopio region) has seen a significant increase in the number of food-related start-ups in recent years. They have done a remarkable job of entering into the market (both local and international) and producing products that have originality and creativity, despite the challenging times of the Covid outbreak and the Ukraine crisis. 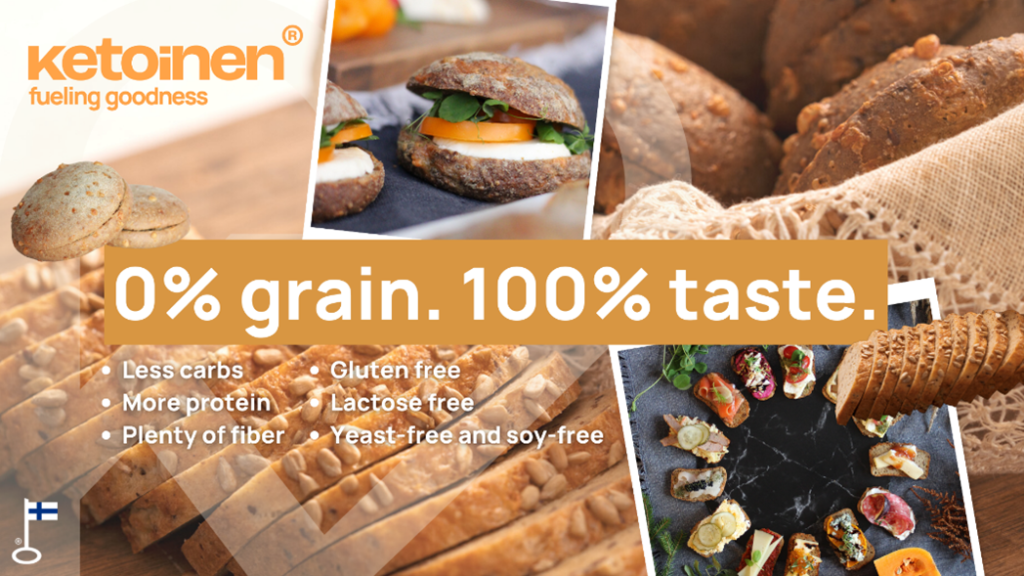 Ketoinen wants to be a leading producer in Finland by 2050. A company with products that are stomach healthy, with a motto “fueling goodness”.

The idea of producing a grain-free bread, was based on the own diet of the co-founder, Niina-Marika Lahnavik-Hoffren. In January 2021, Lahnavik-Hoffren, the entrepreneur of the Kuopio-based restaurant King’s Crown, came up with the idea of ​​a product containing very few carbohydrates that would be especially well suited for the expanding special diet customer and would be simple to distribute throughout Finland. The idea then developed to Ketoinen’s grain-free bread, which was not available in stores at the time. Later, Nanna Mononen, who had prior experience as a bakery entrepreneur, joined in the production planning and product development work. Anni Hoffren, also the entrepreneur of the King’s Crown restaurant, is another key member of Ketoinen and holds the responsibilities as a production manager. The bread was developed from an idea into a finished product and customers found it on store shelves in May 2021. Ketoinen Oy currently employs 10 specialists and has the largest grain-free bread factory in Finland and the Nordic countries.

With a recently signed sales and distribution agreement between Ketoinen and Lantmännen’s Unibake Finland[3], the availability of Ketoinen products will increase for the Finnish and Baltic markets.

“The company intends to broaden its range of products in the coming months with the goal of producing any product that can be made with flour and has characteristics like low carb, high protein, no-grain, no-yeast, and no-soy that are suitable for many people on special diets (due to their medical conditions or simply for anyone who wants to eat healthier). the company is also a participant in a UEF study, investigating the potential use of the company’s goods in the treatment of various illnesses”, Said Toomas Tuovinen, sales manager at Ketoinen Oy.

Ketoinen was aiming for networking and making connections during the Kuopio Goes Slush side event. The long-term goal for this small start-up company is to enter the international markets outside Finland. This side event, was a great opportunity for them to connect with the experts from the industry. 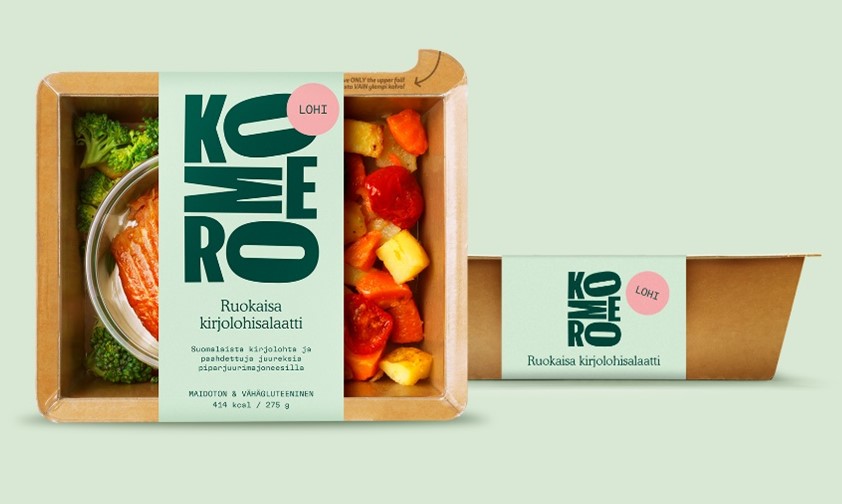 The story behind the creation of Komero Food is all about the passion of the founders, Pekka Nuutinen and Jussi Räisä, for cooking and food in general. They went to the same school together and ended up in Kuopio in their twenties. The Komero Food products were created with the goal of improving and simplifying everyday task of cooking.

In 2015, the company started to grow. Product development received a crucial boost when their “Ateriakippo” product placed in the finals of the Finnish recipe for success 2021 competition[4]. At Komero Food, there is a growing awareness of the effects of food and its preparation on health, animals, and the environment. The company is not inventing anything or creating a new product, but rather simplifying cooking and making food easier and more enjoyable. Komero Food produces around 40k goods per month and distributes only within Finland. As part of its future plans, the company intends to develop new products and packaging. They are currently distributing their products throughout Finland, with Helsinki topping the list of buyers.

Komero’s slogan is “meal accelerator,” and they want to think outside the box, and provide something unique to their customers.

The goal of Komero Food’s participation in the Kuopio Goes Slush side event was to present themselves and their products and build relationships with the event’s diverse food sector participants. This company also intends to expand beyond the borders of Finland and export its products to other countries. 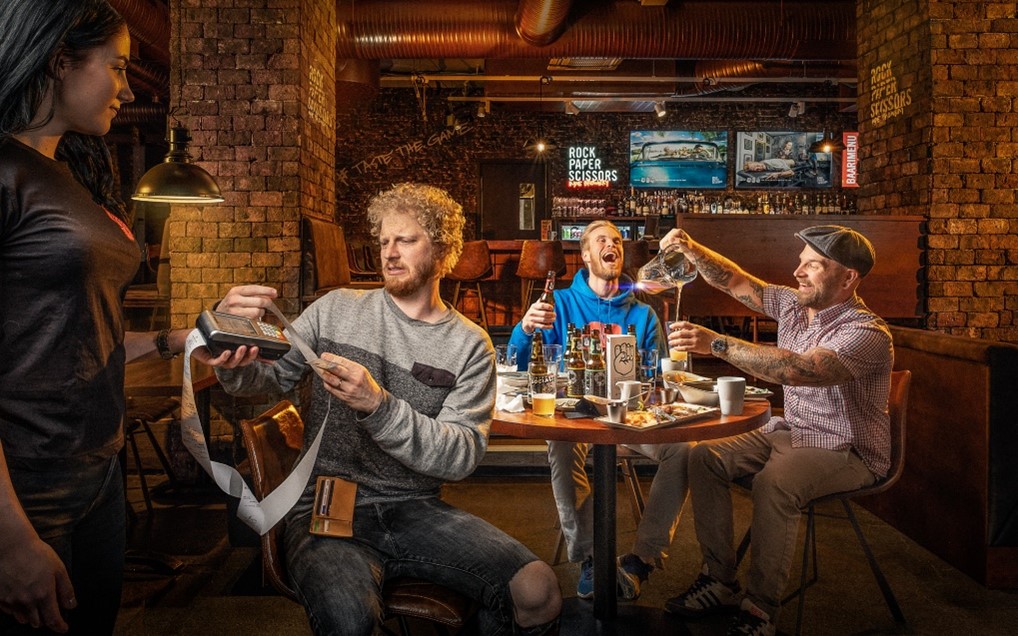 The company’s founders, Samuli Huhtanen, Petteri Pirhonen and Janne Seppälä, had been thinking of founding a brewery for years. The only problem was that none of them could make beer! So, they began asking around for recommendations for a brew master, and all of them led to Aki Railanmaa. In July-August of 2016, they started their company with all four of them. The founders sought for large capacity from the start. They invested heavily to achieve the initial capacity of 500k-700k liters/year, and they are currently capable of producing around 1 million liters/year. They received the facilities to brew their first beers in March 2017, and the product hit the market in June 2017.

“We decided from the start to have our brand in English, RPS Brewing, with a funny story behind it. We co-founded a bar and a club in Kuopio with Samuli in 1997, and ever since, we’ve used Rock, Paper, Scissors to settle problems, pay bills at the bars, etc. As a result, that became the company’s name. When we were named our company, we wanted it to be catchy, lively, and easy to remember, as we wished for our products. We aim to add humor to everything we do and have fun because we believe that life isn’t so hard when you have a sense of humor”, said Seppälä.

Because of the Covid outbreak and now the war in Ukraine, the company’s growth has been slower than the co-founders had hoped. Regardless of all the challenges, the company managed to flourish and make itself known. RPS Brewing provided a hilarious tribute to the 2018 Russia-United States summit in Helsinki by offering their limited-edition lager[5]. Regarding their products, they have received some prizes like the 2021 winner of the European beer challenge, getting gold, silver, and bronze medals for three different beer models. The company’s ambition is to become the most well-known Finnish Brewery in the world. They intend to expand in size, and in order to do so, they will need to construct a new brewery in the coming years to fulfill the demand for 3 million liters/year, which would require a significant investment.

RPS Brewing’s location in Kuopio makes it easy for them to collaborate with other businesses.

“The help you get from companies in your field here in Kuopio is quite unique. Here, we care about our fellow companies,” mentioned Seppälä.

The goal of RPS Brewing’s participation in the Kuopio Goes Slush side event was to interact with other companies, meet interesting individuals and investors, and simply make new friends!

What a wonderful side event, and what lovely people gathered. Until the next Kuopio Goes Slush, kippis! 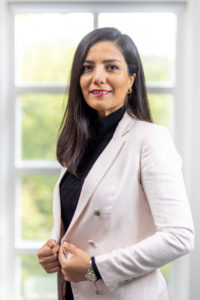 The following people were interviewed for this article:

[1] www.vttresearch.com/en/industries/food-industry
[2] Special Eurobarometer (April 2019), Food safety in the EU.
[3] Lantmännen’s Unibake Finland is part of an entity formed by bakery operations in more than 20 countries, which has more than 6,000 employees.
[4] kotiliesi.fi/ruoka/ideoita-ruoanlaittoon/suomalainen-menestysresepti-2021-kilpailun-voittaja
[5] Read more: apnews.com/article/oddities-donald-trump-helsinki-trump-putin-summit-beer