Home » Sustainable food production – clean food from our own land

Sustainable food production – clean food from our own land

In addition to the health benefits of the food we eat, current debate is increasingly revolving around the sustainability of food production and its impact on the climate and natural resources. Sustainability permeates the full production chain from farms to processing and from distribution to consumers’ plates. Kuopio is the biggest milk and beef producer in Finland. Last year, 73 million litres of milk and 3.4 million kilos of beef were produced in Kuopio. Dairy products not only ensure security of supply, but are also exported. How can the production chain be both environmentally friendly and profitable? 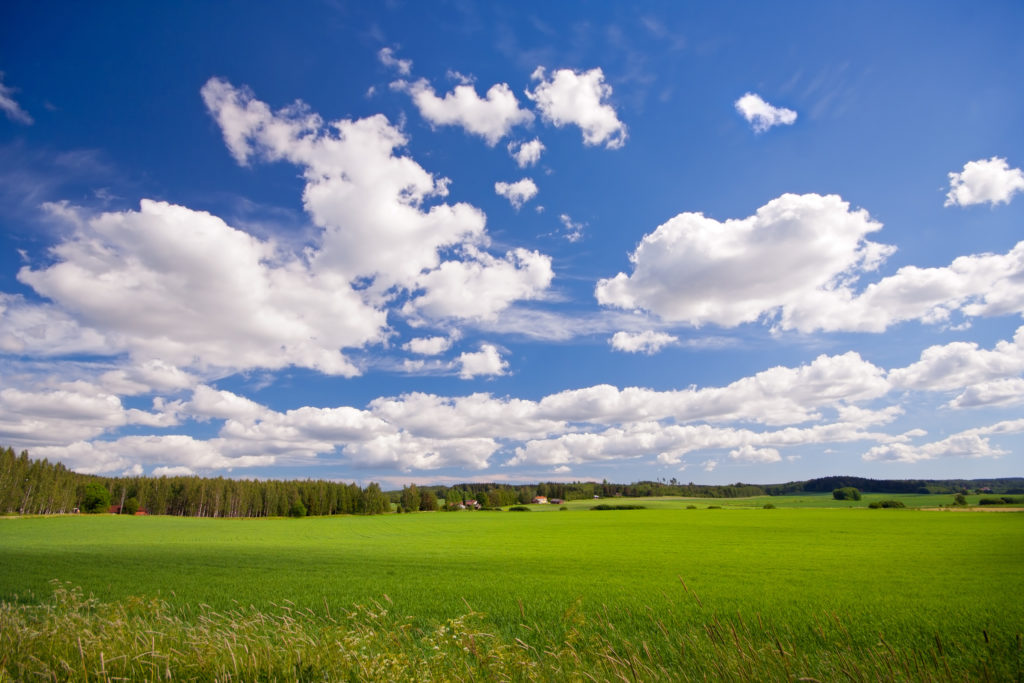 North Savo belongs to the so-called dairy belt, the region where dairy farming is concentrated in Finland. Milk production in northern conditions is based on grass growing. A grass mix that consists of clover, timothy and meadow fescue, for example, is used to make silage, the main feed of dairy cows.

We have optimal growing conditions for grass, and it grows here both in rainy and hot summers. Farmers tend to the grass, because the better it grows, the more it binds carbon. Cattle farming is one of the solutions to reduce the environmental burden of food production.

The climate impact of milk production is studied in Halola, the research farm of the Natural Resources Institute Finland in Maaninka. One of the topics of research is which species of grass thrives best in North Savo. Practical research in conditions that are similar to actual farms produces reliable results that are made available to producers.

“Grass is an extremely effective plant to cultivate, because as a perennial, it fixes a lot of carbon in the soil. Grass produces two to three harvests in a growing season”, says Group Manager and Research Scientist Mikko Järvinen from the research farm of the Natural Resources Institute Finland in Maaninka, Kuopio.

According to the UN Food and Agriculture Organization (FAO), 2.7% of the global greenhouse gas emissions come from milk production. The global carbon footprint of milk is about 2.2 kg, according to FAO.

“Our farms have done carbon farming calculations. They have managed to reduce the carbon footprint of a litre of milk to one kilogram”, says Ilpo Lukkarinen, Managing Director at Osuuskunta Maitosuomi.

Valio aims to be carbon neutral by 2035. Farms plan to achieve zero emissions with the following measures, among others: growing grass that binds carbon, feeding cattle systematically, using fewer peat fields, reducing the washout in the buffer strips of fields and producing renewable energy.

The restoration of pastures also lowers carbon dioxide emissions. The Lohiranta Farm in Riistavesi has young cattle that graze in a traditional biotope in the summer, restoring nature’s biodiversity.

“The traditional biotope pasture is restoring the old grassland with grass-herb vegetation. For example, wild strawberries grow in the land tilled by our heifers’ hooves”, says the farmer of Lohiranta Juuso Voutilainen. 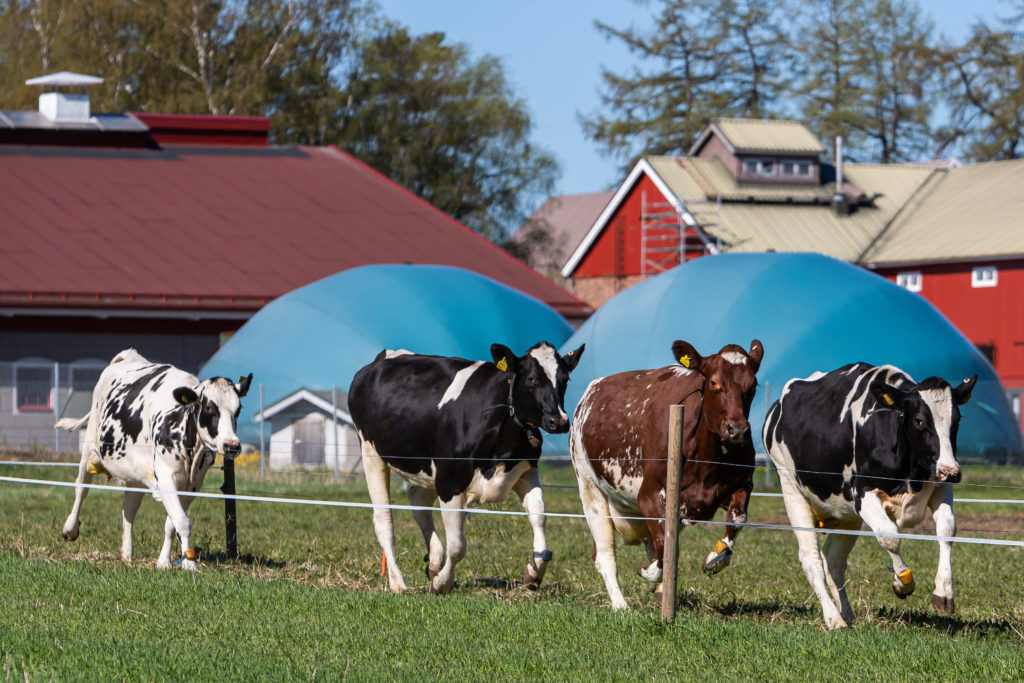 The ideal solution is a circular economy where the farms produce their own energy from the material flows that they generate. Biogas plants that produce both gas and electricity secure the supply of energy and reduce costs in the long run.

According to Jari Kosonen, Business Promotion Officer of the City of Kuopio, there is interest among agricultural entrepreneurs in biogas plants. But the number of plants remains low, despite state aid. Farms are currently unable to make major investments due to the higher production and investment costs.

Although the integrated chain from production to processing is a key asset of Maitosuomi, it all comes down to high-quality milk. All the stages of the milk can be traced and the producers are known, because the co-operative is owned by the producers themselves.

A robot milks cows on the Lohiranta Farm round the clock. The cows can go to the robot station to be milked whenever they want. In the summer, they can freely roam the pasture near the robot barn. Technology is used to monitor animal welfare on the farm, because the robot not only milks the cows, but also monitors the temperature of the milk.

“The temperature of the milk tells us if the cow has a fever. The robot measures the conductivity of the milk and analyses it to identify the infected quarter of the udder. A sample is taken from the quarter and analysed in a laboratory. The vet can then prescribe a specific medication for the sick cow”, says Voutilainen.

Cheese and milk powders are manufactured in Valio’s plants in Lapinlahti with decades of experience. They are transported across Finland and abroad. Various milk powders are exported particularly to developing markets. Although milk consumption has decreased in Finland, it has grown across the globe.

Domestic food is an element of security of supply

“The future of cattle farming depends on security of supply, climate issues and the profitability of the business”, says Juha Nykänen, Rural Director at Sydän-Savon maaseutupalvelu. 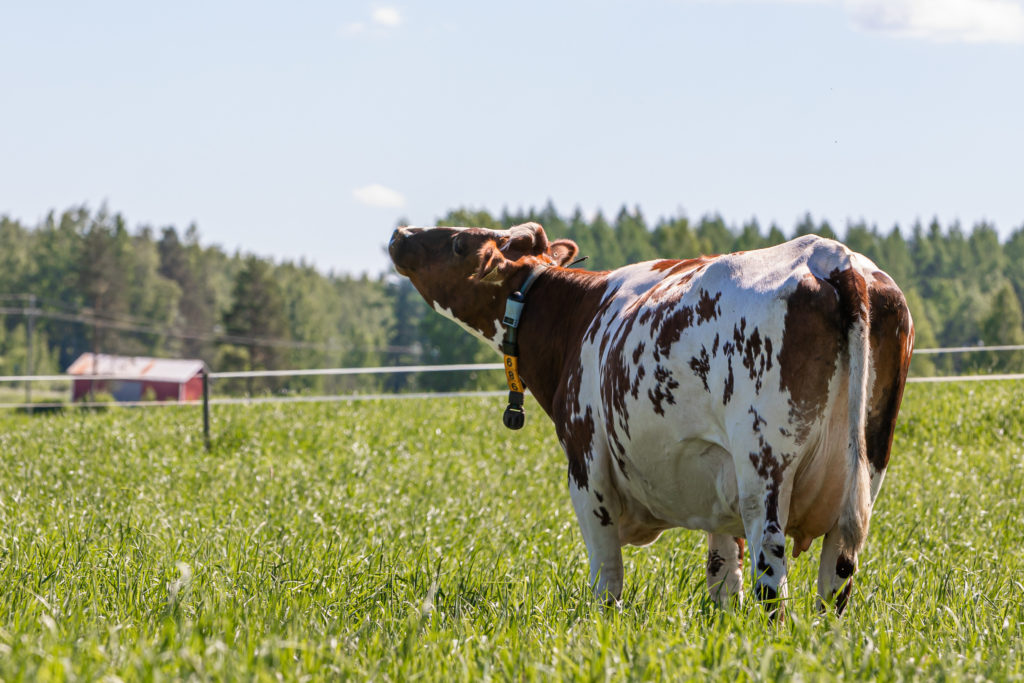 Finnish farms guarantee the supply of clean food. In terms of security of supply – on a national scale – there is a clear need for Finnish food production.

Growing grass to absorb carbon and the circular economy are ways to reduce the environmental burden. Investments in self-sufficient energy sources, such as solar panels or a biogas plant, improve security of supply and also benefit the climate.

Agricultural entrepreneurship requires persistence and also needs to be profitable. The periods under review in agriculture are at least ten years long, so changes do not happen in an instant.

There were about 1 400 jobs in agriculture in the Kuopio region in 2020. One job has a multiplier effect of three more jobs in other industries.

Agricultural entrepreneurs need to make a living from their business. Securing the continuity of primary production is even more important now that the production input costs have gone up and entrepreneurs are struggling.

“Our assets on a global scale are cleanliness, traceability and know-how. We medicate cows only when necessary. We possess the know-how required to produce a harvest every growing season, despite only having a few months to do so”, Järvinen sums up.